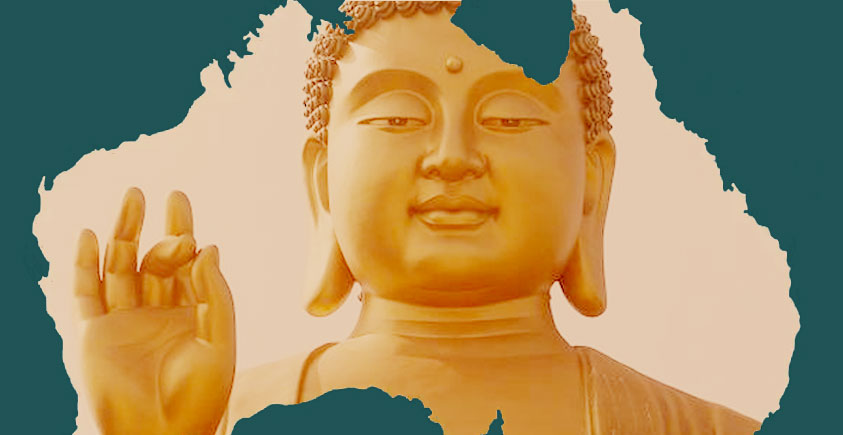 No Comments on Buddhism In AustraliaPosted in Be a good buddhist By lollyPosted on May 23, 2022July 25, 2022

Buddhism has a significant presence in Australia. Buddhism is one of the world’s most popular religions, with over 600 million followers. In Australia, Buddhism is growing in popularity, with more and more people adopting the religion. Maybe this is because it offers peace and meditation in an otherwise hectic, modern world. This article outlines the basics of Buddhism and its practices in Australian society.

The central tenets of Theravada Buddhism are reincarnation and karrma. Reincarnation is the belief that after a person perishes, they are reborn into another body. This means they will continue to experience the pains and pleasures of life until they achieve Nirvana, or enlightenment. Karma is the principle by which we are responsible for our actions and their consequences.

Theravada Buddhism is a relatively peaceful religion. Buddhists believe that violence and hatred are not conducive to achieving enlightenment. Instead, they encourage people to practice patience, tolerance and mindfulness.

Today Buddhism is the second largest religion in Australia, with around two million followers.

Most Buddhists reside in the eastern states of Victoria, New South Wales and Queensland. There are also significant numbers of Buddhists living in Western Australia, South Australia and Tasmania.

The Buddhist faith revolves around the teachings of Gautama Buddha, who lived more than 2,500 years ago. Buddha is considered the founder of Buddhism and his teachings focus on achieving nirvana or eternal peace. Buddhists believe that all humans have the potential to reach nirvana. Still, it is essential to understand that individual progress is not guaranteed. As you might expect, there are no easy answers regarding spiritual practice.

Buddhist monks traditionally live a simple life outside of society. Often they devote their time to meditation and spiritual study. Many monks also work as teachers within the community.

How did Buddhism become popular in Australia?

Buddhism first became popular in Australia in the 1960s and 1970s, when people started practicing it to find peace and happiness. Today, Buddhism is gaining popularity thanks to its peaceful nature and focus on self-improvement.

There are also many Buddhist communities across Australia, each with unique traditions and practices.

Buddhism is a religion and way of life that emphasizes the idea of moderation and non-violence. The First Noble Truth is that life is suffering. The Second Noble Truth is that suffering comes from our attachments to things in this world. The Third Noble Truth says that we can learn not to be attached to cravings. And the fourth Noble Truth is the path to achieving this end. Buddhism teaches that one can achieve peace and happiness through understanding and following these teachings. Buddhist temples can be found all over Australia. However, many people practice Buddhism without ever going to a temple.

Buddhism is generally classified as a religion by scholars. Three primary schools of Buddhism exist: Theravada, Mahayana, and Vajrayana. Although all three share some core beliefs and practices, they differ significantly. Theravada Buddhism is the most popular form of Buddhism in the world. It is based on the teachings of the Buddha, who lived in India around 600 BC. In Theravada Buddhism, the Buddha is seen as a teacher who taught people how to achieve Enlightenment or Nirvana. There are still many followers of this form of Buddhism in South-East Asia and parts of South Asia.

Buddhist meditation calm the mind by focusing on the present. A practice called “mindfulness” can help to keep a person centered at the moment.

Many Buddhist practices can be done in Australia, depending on your location and personal preferences. Here are some basics: